Akhil a 14 yr old boy recovering from autism is an inspiration behind Akhil Autism Foundation. Akhil was born as a healthy baby and growing normally after his first birthday he started rapidly regressing lost his eye contact, stopped responding to him, lot of tantrums, meltdown , no gestures, no socialization and all typical autistic stimming behaviors. Mahesh and Manisha M Lad parents of Akhil accepted autism in a very positive way and thus Akhil Autism Journey started. 6 yrsAkhil has undergone various alternative functional medicine treatment and all his underlying medical conditions were treated which helped all his behaviors. By age 10 he as a very different boy socially connected but yet there was a missing puzzle zero academics inspite of attending one of the best schools in NJ still nonverbal and had no communication media for expressing his thoughts. One of the testing done by Dr Frank Duffy from Harvard stated “he can process ,decode the information at a rapid speed but returning back is a problem”. By Age 11 Akhil was exposed to Supported Typing which is also called as Facilitation Communication and this is the first time when Akhil got to express his thoughts via ipad. This opened up the entire world for him and his parents , where due to a stronger relationship with parents they could now understand his world. Akhil has a very intelligent genius mind but he has a hard time to connect his mind to his body and he has expressed via typing “my brain does not give instructions to my body”.  In 13 yrs of Akhil Autism Journey his parents were convinced to believe in all the other open minded or so called controversial therapies and treatments and FC was one of them.  The new for autism now was “Autism is a Mind and Body Disconnect” and the huge concern was how to connect his mind to his body as he was lot in his subconscious mind and not too much conscious thus he had a hard time to handle his behaviors. Finally at age 13 Akhil started the  treatment with Dr SvetlanaMasgutovaNeurosensorimotor reflex integration method(MNRI) after attending each 5 days camp twice a year with home program 1 hr every 5 days in the home he is now able to independent type and connect his mind to his body at a faster speed.  He is fortunate to have access to such parents and such resources. Akhil now learns all grade level academics in his school and is becoming more independent. He has a decision and view in every part of family friends and society. 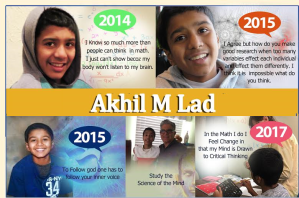